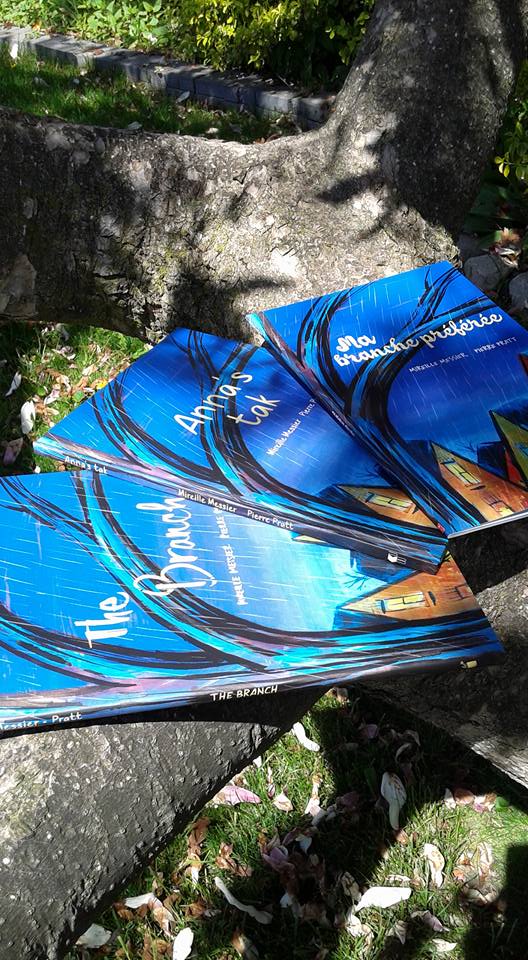 It’s not even in stores yet and already I have some great news to share with you about my forthcoming picture book The Branch! Not only will it be available in English (Kids Can Press, September 2016) and in French (Éditions Scholastic, January 2017) but it is also now available in Dutch! Thank you to the KCP team for this new and exciting offshoot of The Branch! 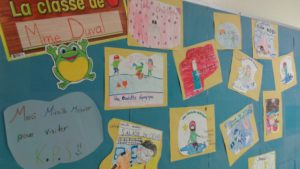 From the moment I walked into Keswick Public School from the snow storm outside, I knew it was going to be a good day.
The secretary knew who I was and seemed glad to see me. The teacher-librarian, Sheila Pollard, was there to greet me in a flash and had already set up a fantastic spot for the presentations (she even brought in some daffodils to brighten up the table!).

The halls were covered (and I mean COVERED) in beautiful art work from the students inspired from my books. The kids had read my books, they had questions, they were listening, they were smiling. And the teachers were too! It was nothing short of magical! I got as much from my visit at Keswick P.S. than the children did, I hope.

Thank you so much for the warm welcome, Keswick. I hope to see you again soon!

The mailman made my day today. He delivered my copy of the Kids Can Press Fall 2016 catalog. I knew my upcoming picture book, The Branch, would be in it since it’s due out in September. But what I didn’t know was that it was featured on the cover! I looks amazing! Thank you KCP! And Thank you Pierre Pratt for the breathtaking illustrations! 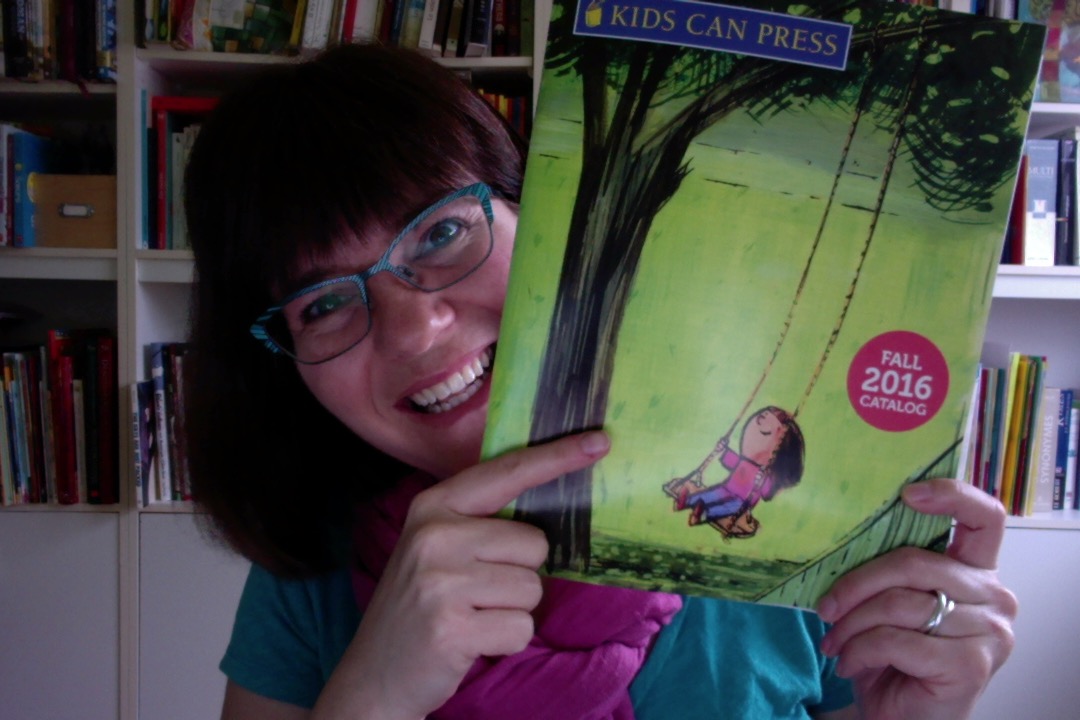 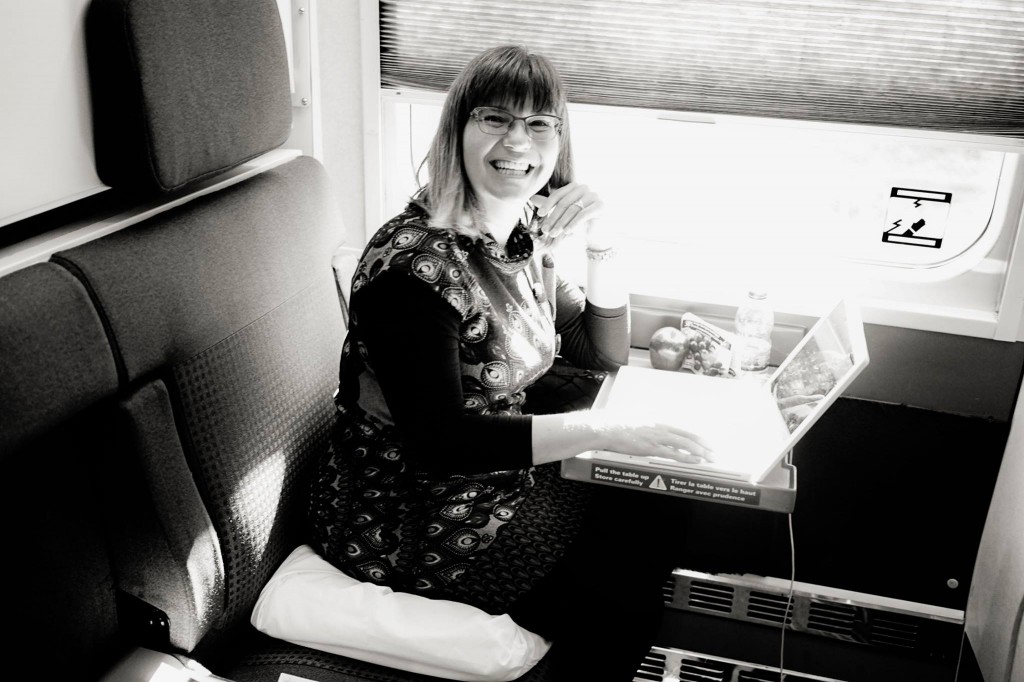 About a year ago, I heard about this crazy project: Les 24 heures du roman. On October 24th 2015, 24 francophone authors from around the world were going to write a 24-chapter book in 24 hours while riding on a Via Rail train from Halifax to Toronto. And since the project was going to highlight the 400th anniversary of Samuel de Champlain’s presence Ontario, the book had to be about Champlain. “That’s nuts!”, I thought.
When I read further, I realized that the organizers were also looking for a few Franco-Ontarian authors that would be interested in taking part. “Hey! I’m a Franco-Ontarian author!”, I thought. And before I knew it, I had applied.
Never in a million years did I think they’d pick me. First, I have never written any books for adults. Second, my application was kind of…well… silly! I wrote a long, rambling essay on the virtues of being able to write on a train even as it travels backwards without feeling nauseous. I’m still not sure what possessed me to apply. This was way out of my comfort zone!

So imagine my surprise when news came that I was one of the 24 authors selected to be writing on the train!

Luckily, I had many months to beef up on my knowledge about Champlain (because, let’s face it, I knew very little) so I read this, and this, and I watched this, and this too. I took notes. I wondered what I’d gotten myself into. I lost sleep. I took more notes…

October arrived and I got on a plane to Moncton where I would meet the other 23 authors for the very first time. I was excited and… completely terrified. The room was abuzz with nervous energy. 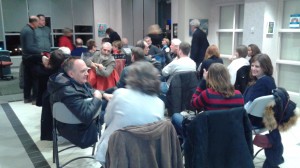 Each author presented themselves “AA-style” (My name is ___ and I’m a (Franco-Ontarian/French/Quebec/Acadian/Aboriginal) author). Then came the moment when each author was assigned a theme for their chapter. We all held our breath. My chapter would have to be about the legend of the Gougou – a mystical aboriginal man-eating sea-monster said to live in the Baie des chaleurs area and greatly feared by Champlain. “Yes! I can do this,” I thought. My text would be in the middle of the book, sandwiched between Gracia Couturier‘s chapter about the building of Quebec city and Marie-Josée Martin‘s chapter about an interracial marriage. Good company, to be sure! 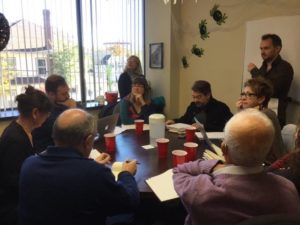 The following two days were a whirlwind of meetings in small and large groups to chat about how the book was to come together and how each chapter was to anchor the previous and the following one chronologically. We also got to use material from one another’s chapters. Some borrowed characters, items, created little nods… I was thrilled when Viriginia Pésémapéo Bordeleau and Bertrand Laverdure decided to mention the legend of the Gougou in their own chapters, linking it to mine. 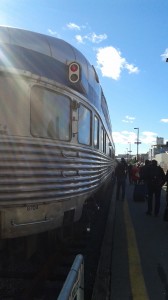 On the 24th, all 24 authors, the organizers, the publisher, a team of researchers, a team of proofreaders, a musician, our very own barista, a Radio-Canada journalist and a documentary crew boarded Via’s Ocean train in Halifax. Spirits were high! Each author got to their cabin and set up what would become their “office” for the length of the experience. Departure was at noon sharp. Absolutely no writing before that. I started writing at 12:01 as the train pulled out of the station!
I could go on for hours describing the experience but let me sum it up to this: it was INTENSE!

My main concerns were:

Another constraint that I hadn’t planned on, soon made itself clear: I had motion sickness! And, no, the irony of this was not lost on me. So I got myself a ginger ale, made the font size larger on my screen and I plowed ahead. At dinnertime I was at 1600 words. Nowhere near to where I had hoped to be or needed to be. Worst yet, I was pretty much done telling my part of the story. What could I do? Chatting with other authors over dinner helped to give me a few ideas and a second wind. I handed in my chapter at 11:50 pm with a word count of 2200 words. I little short, just like me 😉 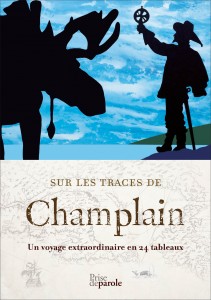 Sur les traces de Champlain, the book deriving from this extraordinary experience and published by Prise de Parole, will be launched at the Salon du livre de Montréal on November 22nd. It will also be in bookstore by mid-November. A second launch, which I will attend, will take place at the Salon du livre de Toronto on Saturday December 5th at 1pm. I hope to see you there!

I got some great news today!

Every year, the Ontario Library Association (OLA) has a wonderful literacy program called The Forest of Reading where young readers from across the province read a selection of books and vote for their favourite. This culminates into a massive celebration at Harbourfront in Toronto in May where thousand of kids come and meet the authors they’ve read. Since 2010, Forest of Reading also has French categories. In the past, I’ve had the pleasure of having two of my books, Tous les œufs dans le même panier and Coup de théâtre à Stratford, make the cut and be finalists for this award. 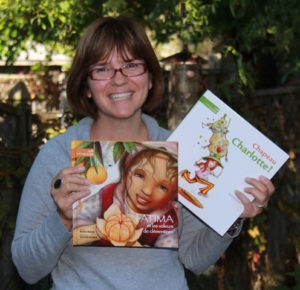 Today, I got the news that not one but TWO of my new releases are in the running! Fatima et les voleurs de clémentines is a finalist for the Prix Tamarac Express and Chapeau Charlotte! is in the running for the brand new picture book award, Prix Peuplier.

Thank you, Forest of Reading selection committee! Now, all we can do is read and… knock on wood! 😉

As of Monday, I will be in the Saguenay region meeting with young readers. Fatima and Charlotte are coming along for the trip. Some kids, I will see at their schools, others I will meet at the annual Saguenay book fair (Salon du livre du Saguenay-Lac-Saint-Jean). either way, I’m really look forward to it! If, per chance, you are in the area, please don’t hesitate to swing by and say “bonjour”!

As the 2011-12 school year draws to a close, I’d like to take a few minutes to reflect upon all the wonderful school visits I had the pleasure of making in the last few months. How inspiring and energizing these have been! I’d also like to thank all the schools, teachers and students who welcomed me into their classroom to share with them (In French or in English) my love of writing and books. A special thanks to :

Here’s to hoping the 2012-13 school year is just as exciting! Have a great summer! 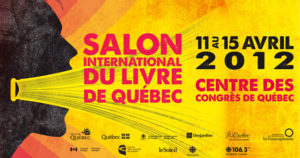 This year I will have the great pleasure of leaving my office and going out to actually meet my readers. I will be at the SILQ (Salon du livre international de Québec) from Thrusday April 12th to Sunday April 15th. I really look forward to this, and not only because the SILQ is only steps away from the most amazing burger place in all of Quebec city! No, I look forward to seeing how people I don’t know will react to my book. Will they pick it up? Flip through the pages? Perhaps even buy it? I’ve tested out my pens (blue vs. black, ball vs. marker, fine point vs. ultra fine point) and I believe I am ready to face the crowds of adoring fans. Ha!

If you’re in the area, please swing by. I’d love to shake your hand. For a complete schedule of my signing sessions, click here.