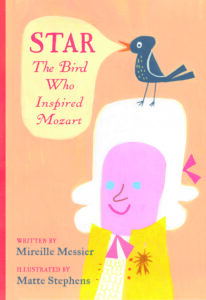 In this charming picture book, author Mireille Messier tells the story of a very special relationship and how it began: with a chance musical encounter. And Matte Stephens’s playful art captures both the grandeur of 18th century Vienna and the budding unlikely friendship between a famous musician and a humble starling.

You can pre-order this book by clicking here! Or by visiting your favourite indie bookstore 🙂

“In 18th-century Vienna, a starling explores and replicates the noises she hears all around her. She mimics sounds from the streets, animal calls, and even human speech. For a time, she perches in a tree outside the window of a musician and his family. When the starling is captured and taken to a pet shop, she becomes despondent and loses her song. But soon she is bought and taken home by the very musician whose window she used to frequent—none other than Wolfgang Amadeus Mozart. The narrative draws inspiration from the true story of Mozart’s purchase of a pet starling and his transcription of the bird’s song, eerily similar to one of his unpublished compositions. Where music historians differ on their explanations of this mystery, Messier posits a charming prior connection between man and bird. She characterizes the bird with winning details, including its repeated use of the German-accented onomatopoeia “Piep!” Stephens provides cheerful poster-colored paintings in a naive style, solid shapes, and loosely drawn lines suggesting facial expressions and environmental details. He injects subtle humor into the nooks and crannies of the story, particularly the face of the dyspeptic bird catcher and the starling’s casual soiling of the piano in front of Mozart’s dismayed student. VERDICT This is an endearing piece of historical fiction, and perhaps an early entry point into Mozart’s oeuvre.”

“Launching from legends about Wolfgang Amadeus Mozart’s musically precocious starling, Messier imagines an origin story for the pet, a fresh entry point into the life of an icon of Western classical music. Exploring Vienna, a starling chick imitates springtime sounds before perching outside Mozart’s window, his music “more beautiful than anything she had ever heard.” When a bird-catcher cages her, her chirping of a memorable tune finds the ear of its composer and (…) inspires a lengthy creative collaboration. Messier’s Vienna burbles with German-language sounds, including a cat’s “miau” and a townsperson’s “Guten morgen,” providing opportunities for readers to imitate along with the starling. Stephens renders high-contrast illustrations using unlined shapes to create simple, blocky figures portrayed with fanciful skin tones in whimsically off-kilter cityscapes. An author’s note concludes.”